One of the most exhilarating things about Stillwater Artsapalooza is that you can “choose your own adventure” of artists!  Heck, you can leave the exuberant dance performance by Robinson Ballet at 7:40p.m., head to Harvest Moon for an insightful and moving poetry reading at 8:00p.m. and then head to the Asa Adams Elementary School for a knock-your-

socks-off rock concert by the Blast Addicts at 9:00p.m.!   And those are just a three of the 50 artists from which you’ll be able to choose!

We are so excited that Robinson Ballet and the Blast Addicts have agreed to be two of our groups featured at Stillwater Artsapalooza!  Read on for more information about these fantastic acts!

Robinson Ballet was founded in 1977 and is a highly respected dance company that enhances our community by reaching out to educate, inspire, and involve people of all ages by providing opportunities to create and experience quality dance.

Robinson Ballet is based in Bangor, Maine and will be giving a performance entitled “The Kitchen Sink” for Stillwater Artsapalooza at th

The “Kitchen Sink” is a series of short dances highlighting the versatility of the company and its dancers.  This quirky lighthearted performance blurs the conventional forms of dance to create pieces that show the diversity of the Robinson Ballet as well as to introduce dancers and choreographers from the School of Robinson Ballet to the community.  For more information about the fabulous programming and classes Robinson Ballet provides please visit: http://www.robinsonballet.org 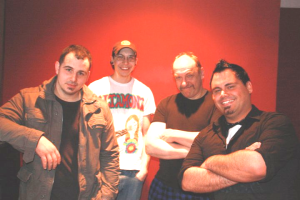 The Blast Addicts will be performing for Stillwater Artsapalooza at Asa Adams Elementary School from 9:00p.m. to 9:40p.m.  They have been rocking out in this area for a year now and are a hard hitting, high energy Rock/Pop/Blues band featuring the amazing vocalist Jason Simpson, guitarist Mike Curtis, bassist Athion Lewey, and drummer Ron Douglass.  They play a wide range of music including; Jimi Hendrix, James Brown, Lady Gaga, Pink, Stevie Ray Vaughan, ACDC, Rihanna, Heart, Queen and many more great songs, and every song is a dance hit, so get ready to get your groove on! 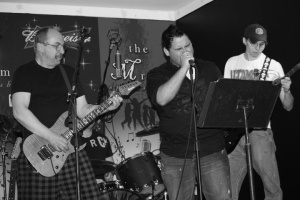 The Blast Addicts have been together for one year and have played to great acclaim all over Central and Coastal Maine. In the Bangor area they can be seen playing regularly at Ipanema Bar & Grill, Raena’s Pub, Carolina Sports & Spirits, and Benjamin’s on Franklin. They’ll be coming to us straight from the Bangor Gay Pride Festival earlier in the day on June 25th, and will be headlining the Eastport 4th of July Festival for two nights, July 2nd and 3rd, and then will be back in Orono to play Webster Park on July 6th, so, if you like what you hear at Stillwater Artsapalooza there will be quite a few more chances this summer for you to catch this awesome band.

June 25 is just under a month away and we are beyond excited to be able to preview some of the artists who will be performing and displaying their fantastic work at Stillwater Artsapalooza.  Don’t forget to mark your calendars for Saturday, June 25 from 6-10p.m. for an awesome night of the arts in downtown Orono!

The Church of Universal Fellowship has graciously agreed to be a venue for Stillwater Artsapalooza and will  host four performances in its sanctuary.  One of the performers at the Church of Universal Fellowship from 8-8:40 p.m. is Lauren Onsrud, an Orono High School graduate, and well known by many for her starring role as the infallible Sally Bowles in Orono High School’s production of Cabaret. Read on to learn more about this stunningly talented young woman. 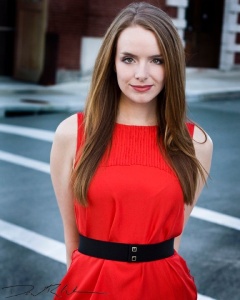 Emerging soprano Lauren Onsrud is known for her captivating stage presence and strong, flexible voice. While completing her degrees in Voice Performance at the University of Missouri- Kansas City and the University of Southern Maine, she gained performance experience through her involvement in opera, concert, and musical theatre. She also gained professional experience as an emerging Young Artist with PortOpera in Portland, Maine and the Halifax Opera Workshop in Nova Scotia, Canada. Ms. Onsrud was most recently seen in Kansas City Metro Opera’s Production of Charlotte’s Web playing the character of Templeton. Of the performance, KCMetropolis.org said, “Lauren Onsrud played Templeton the Rat with an endearing abrasiveness…Her vigorous acting and strong voice made her a stand-out.” 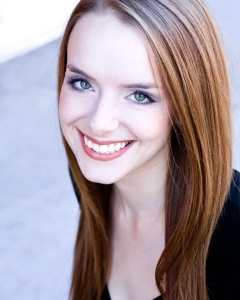 In addition to her operatic background, Ms. Onsrud is an accomplished recitalist and concert soloist, and was recently a finalist and winner of the National Association of Teachers of Singing Missouri Advanced Division. Lauren has also forayed into musical theatre, most recently being seen as Grace in Annie at Theatre in the Park, a production that drew over 10,000 audience members.  To read more about Lauren Onsrud please visit: http://www.onsrud.org/lauren

Story Slam Bangor is a fantastic community building program that started here in the Orono area with the goal of giving people a time and space to tell their story.  Story Slam Bangor will be featured in Stillwater Artsapalooza at Verve from 8:40p.m. to 9:40p.m. 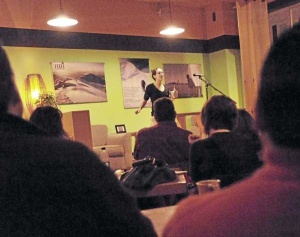 Story Slam Bangor happens one night a month in the Orono/Bangor area and was started by Anya Rose, Jesse Moriarity and Zack Pike who were brought together by a shared love of NPR’s The Moth. The concept is simple: 50 or 60 people get together each month at a local venue and tell stories based on a theme. Not everyone tells a story, some folks just come and listen.  Those who opt to tell a story throw their name in a hat and 10 names are chosen at random to tell their story. There is a 5 or 6 minute time limit and at the end the audience gets to vote for their favorite story of the evening. The winner receives a fabulous prize.  Story Tellers have come from all walks of life to share their stories.  The stories are sometimes funny, sometimes sad, and always very poignant.  This event brings about a better understanding of ourselves as people, and builds an amazing sense of community, so what’s not to love about that?  To learn more about Story Slam Bangor please visit: www.bangorstoryslam.org